Are there too many Elephants?

A Paradox: are there too many Elephants?

The media regularly spreads rumours that there are too many elephants. Most of these reports are from South Africa, one of the few African countries where elephant populations experienced a steady increase over the course of the last few decades. All in all there are only four countries in Africa (Namibia, Botswana, Zimbabwe and South Africa) where an increase in elephant populations could be recorded over the last few decades.  Recently, even these countries have been experiencing an exponential rise in poaching. 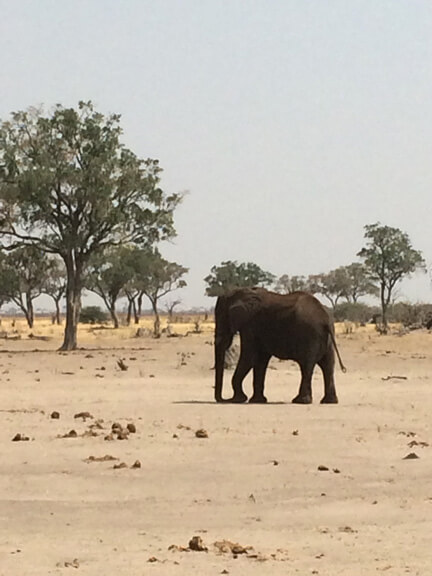 In line with reports about ‘too many elephants’ the subject of vegetation is being discussed regularly. It is being claimed that vegetation suffers from the high number of pachyderms. Elephants are said to destroy the forest.

It is important to know that this very forest in southern Africa could only grow in such a way because - due to excessive hunting in the 20th century - there were very few remaining elephants. Prior to the 20th century this lush vegetation did not exist.  Apart from this, a forest is not the only desirable landscape: for the biodiversity, i.e. for other animal- and plant species, a variety of landscapes is needed, including savannas and open spaces (grasslands).

In addition, there is also the fact that elephants not only push down trees and debark them, but by spreading their dung which contains seeds of many plants they also plant new trees at the same time fertilizing the soil.

More information can be found here:why the world needs elephants.

The ‘harmfulness’ of elephants is therefore to be considered a matter of human projection.

When hearing of ‘ too many elephants’ one should always keep in mind that some southern African countries (Zimbabwe, South Africa, Namibia) want to use the tusks of their elephants commercially and that therefore their ‘complaints’ about the overpopulation is being used as an argument for future ivory trade.

Facts about countries in which elephant numbers increased over the past few decades:

Contrary to many statements, the elephant numbers did not increase in recent years but remained stable since 1996. Prior to this time, the elephant population in Botswana experienced an increase because the intelligent animals moved out of the war-torn countries Angola and Mozambique into Botswana.

Wild animals are doing well in Botswana because the government supports nature conservation and eco-tourism (photo-safari tourism). Up to now  there was little poaching, because there are not many roads leading through the bush, making it difficult for poachers and illegal ivory trade to get to the animals.  In addition, there are only few local criminal networks of smugglers. However, poaching did increase in Botswana because Botswana, same as Kenya, follows the ideal of minimal impact from humans on nature and therefore does not fence their nature reserves.

These three countries were governed by a white minority in the past and their security structures partially still exist.  The economic conditions – at least in South Africa and Namibia – are better than in the rest of Africa, and therefore there are enough funds to pay towards effective protection of wild animals. National Parks and Game Reserves are protected better, and poaching statistics used to show lower figures, compared to other African countries. Sadly this has been changing since approximately 2012, and even in South Africa and Namibia poaching has been on the rise.

In Zimbabwe, where elephants used to reproduce in the past, many regions suffer from excessive poaching, i.e. there is no increase in elephant numbers but rather a drastic drop in certain regions.

One reason why the elephants of Kruger National Park in South Africa have proliferated is that pachyderms have been escaping from the unstable neighbouring country Mozambique and have moved into the Kruger.

The main reason for the complaints about the many elephants which, due to the size of the herds and their insatiable appetite destroy large strips of land is, however, the fencing being practised in these countries. It is because of the fencing that elephants cannot migrate the distances they normally would: they cannot roam vast wilderness areas freely and are dependent on what is available within the fenced-in area. If conservation areas are fenced in, humans have to get involved and, e.g., provide water during droughts. Above all South Africa and Zimbabwe have a tendency to manage their respective Game Reserves like cattle farms. (Elephants were culled in both of these countries in the 1960s.) Many regions lack natural water sources and water is therefore being supplied. It has been proven in the meantime that fencing-in and providing water not only increases elephant numbers but exponentiates them!

Latest research in Kruger National Park suggests that elephant populations regulate themselves naturally if human interventions such as fencing and providing of water are being reduced or stopped. If watering holes are not being filled anymore, elephants are forced to find the closest natural watering hole. Previously the animals would find a watering hole no further than 5 kilometres from anywhere in the park, hence they did not have to roam. The closure of watering holes resulted in an improved natural selection (more calves and older elephants died), and a decline in birth rates. Birth intervals and the ability to receive changed in elephant cows as they had to walk longer distances.

In the meantime fences have been demolished, e.g. between Kruger National Park and Mozambique as well as fences to neighbouring Game Reserves (to the west) thus giving the elephants more space.

Gradually it seems to be generally accepted that the best possible solution to the ‘elephant problem’ lies in cross-border Game Reserves and corridors and this is being practised increasingly. (Examples: KAZA and Greater Limpopo Transfrontier Park).

Facts about countries in which elephant numbers decreased over the past few decades:

The elephant populations in other African countries where Game Reserves are not fenced in have either regulated themselves (e.g. during droughts), or they have be decimated by poaching.

In some countries a state of war prevails, or they are surrounded by countries which are at war. Sadly, where weapons are numerous and easily accessible this leads to a drastic increase in poaching. Rebel groups and terrorist organisations that are financing their criminal activities by ivory are active in many areas.

Especially in those areas many people are suffering and would do anything – including the killing of wild life - to get their hands on money and/or food. Poaching is a major problem in many countries. The ivory business is highly lucrative and tempting – for poor people as well as for greedy ones.

Some of the governments are not particularly concerned with animal protection. Many officials are corrupt and benefit in one way or another from the ivory trade.  Overall, in those countries there is less money available for the protection of Nature Reserves.

The National Parks and Game Reserves are, if at all, only partially fenced which leads to regular human-animal conflicts in which elephants lose out. In addition, the population explosion has a major impact: too many people claim land which used to be elephant land – and although this is a problem all over Africa, it is even more severe in non-fenced areas. Areas with a steady water supply are being claimed for livestock – wild animals are being displaced.

Because of intense poaching there are not enough elephants in most African countries. The population numbers are as low as never before in the history of our planet and are constantly decreasing.

A new study impressively disproves the statement of too many elephants. It suggests that in reality we have only one fourth of the number of elephants we should have, taking the living conditions in the African Nature Reserves into consideration – assuming that there was no poaching problem. In other words: in the 73 huge African Nature Reserves there is enough space and food for another 730,000 elephants.

However, in only four (!) countries in the south of Africa did the numbers actually increase over the past few decades. But this local increase is often a result of animals escaping from war-torn countries, i.e. elephants are not more numerous, they have just migrated to other regions. In all of these four countries poaching has increased dramatically since 2012.

In reports about ‘too many elephants’ the sheer numbers as well as the ‘ harmfulness’ of elephants on the vegetation is often severely exaggerated.

In areas of high elephant density (which is only the case in regions of Southern Africa) the direct cause are always humans, due to fencing and water provisions. Possible solutions: discontinuing these practises and establishing migration corridors for elephants.

Savanna elephant numbers are only a quarter of their expected values
http://journals.plos.org/plosone/article?id=10.1371%2Fjournal.pone.0175942